Now that I have nuget restoring my projects packages in strider at build time, I wanted to get msbuild's output colorized. I was hoping that it would have an option to force color on, but unfortunately it does not. What I found odd is that you can force it off. W.T.F. I get that by default you don't want to be sending ANSI color codes to a log file, but why not give both options for controlling color on the console? Thankfully, msbuild supports custom loggers. So, at least there is that. It is annoying that I have to try to duplicate the default logger, but at least it is possible.

Instead of adding the logger to strider-dot-net, I decided to add a new package: strider-msbuild-logger. This enabled me to make it an optional dependency for strider-dot-net. This is important because during an npm install, the logger is going to have to be compiled. I didn't want strider-dot-net to fail to install if for some reason the colorized logger couldn't be built. The other thing that this new package does is give you the path to the logger. If it is null, or undefined, you can safely assume that the logger doesn't exist.

The javascript for the logger's index.js is very simple:

Since it is an optional dependency, the require could fail, so I have to protect the code that uses it with a try/catch block (in strider-dot-net's worker.js):

The actual meat of the logger is pretty boring, as it just implements the ILogger interface. I did finally figure out the ANSI control codes, thanks to wikipedia (of course). What is interesting, is that it doesn't seem to control the output when building manually in a Windows Command Prompt (it displays them as unicode characters). The article specifically states that Windows Command Prompts don't interepret these sequences, so that would explain it.

At the end of the day, I'm pretty happy with how it turned out: 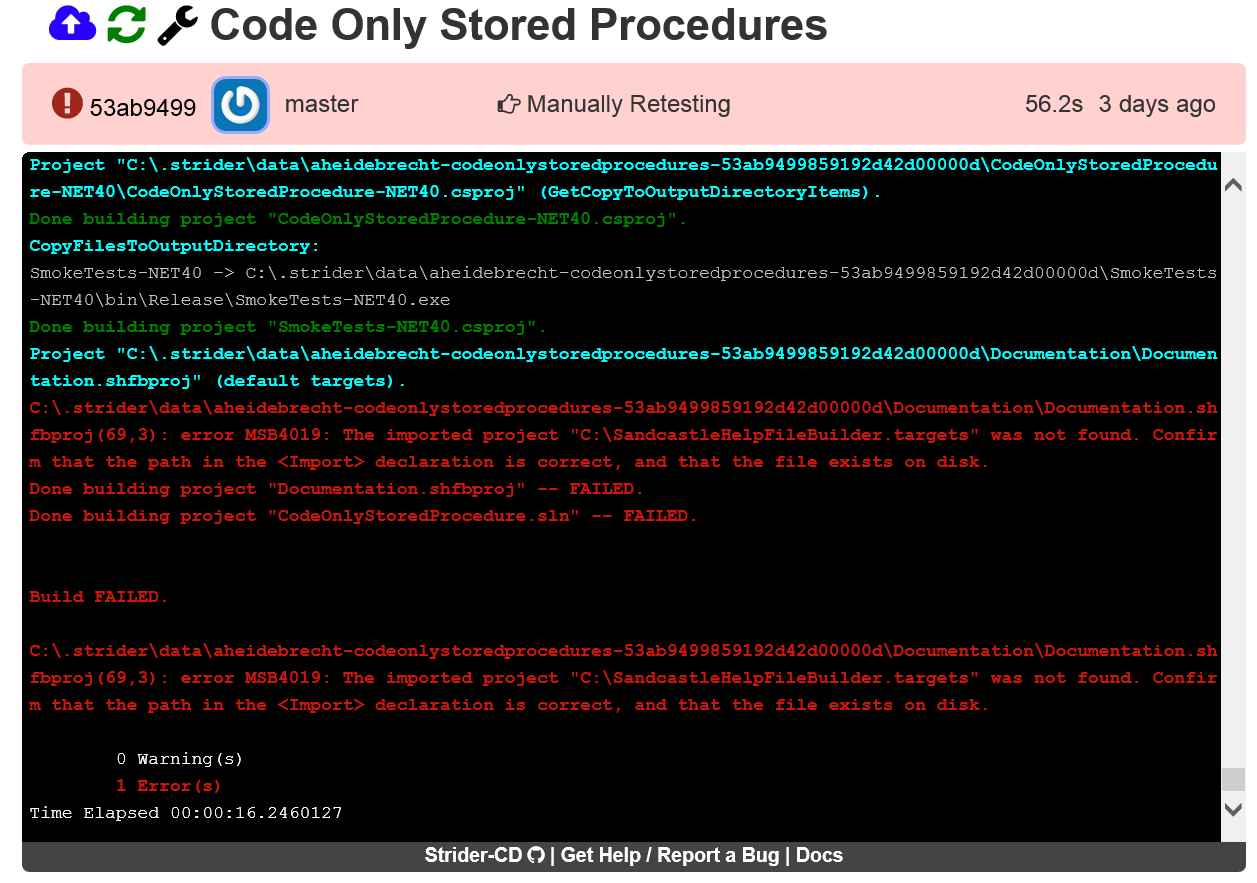 You can grab the code on github.

Since getting .NET projects building in strider was pretty easy, I decided to add built-in NuGet package installation. That way, you don't need to store nuget.exe for every single project you create (NuGet package restore). Thankfully, http://nuget.org hosts the latest version of nuget.exe at http://www... Read More
After successfully getting code from Codeplex, I was eager to get one of my projects building. The two I care about are both .NET projects. I knew there was no .NET support in strider when I first started investigating it, so I knew I was going to have to make... Read More
After my last post, I was at the point where strider would list my repos, and I could even see a little checkbox by their name. Unfortunately, clicking on the configure buttons would do nothing. This is because clicking those buttons calls getBranches, and I am not yet doing anything... Read More
After my last post, I can now get an authenticated user's repositores. However, I am experiencing a couple of issues. First, the codeplex oauth tokens expire after an hour. Because of this, I am seeing a number of authentication errors. In order to solve this, I need to get the... Read More
When I last left off, my codeplex plugin for strider was able to pull in repos from codeplex by passing in a valid codeplex username. While it was a great proof of concept, it isn't the way that strider wants (and in fact needs to) to interract with source control... Read More